The Differences Between Hemp and Cannabis Hemp and cannabis are both derived from the same species (Cannabis Sativa). The first time ever that the cannabis and hemp plants were classified was by a Swiss botanist called Carl Linnaeus. He was the one to call it Cannabis Sativa.

We’re here to discuss the major difference in characteristic of the respective plant strains that produce industrial hemp on the one hand, and cannabis products on the other. Most people understand these difference in terms like “cannabis is a drug but hemp isn’t”, and “hemp comes from the male plant and cannabis comes from the female plant.” However, the reality of the situation is a little more complex.

The main factor that determines the difference between hemp and marijuana is the amount of THC (tetrahydrocannabinol) present in both. Therefore there is a difference in the chemical makeup resulting in a marked difference in the quality of intoxication or “high” cannabis provide.

There are other factors like the cultivation, genotypes, appearance that clearly marks the differences between the two. Marijuana and hemp can also be differentiated on the basis of their usages. Hemp is mainly used for industrial purposes whereas weed or cannabis is quite useful for medicinal and recreational purposes.

What is Hemp? Definition and Usages

In Short: Hemp is a strain of the Cannabis sativa plant that is grown primarily for use in industrial applications. It has been specifically cultivated to produce a low tetrahydrocannabinol (THC) content and a high cannabidiol (CBD) content. THC is the psychoactive constituent of cannabis, and is responsible for producing the effects of the drug. CBD is another active ingredient present in Cannabis sativa plants, and it largely acts to neutralize the intoxicating effects of THC and has a lot of great health benefits. Since hemp strains have very little THC and a lot of CBD (if grown to flower), they do not produce intoxicating effects when consumed.

In the U.S., industrial hemp is defined as a Cannabis sativa plant not containing more than 0.3% THC. The European Union has set the limit at 0.2% THC, while in Great Britain the limit is zero THC, unless growers have a cultivation license to grow industrial hemp with no more than 0.2% THC.

Hemp Fibers are used for a wide range of industrial purposes including clothing and textiles to cosmetics! 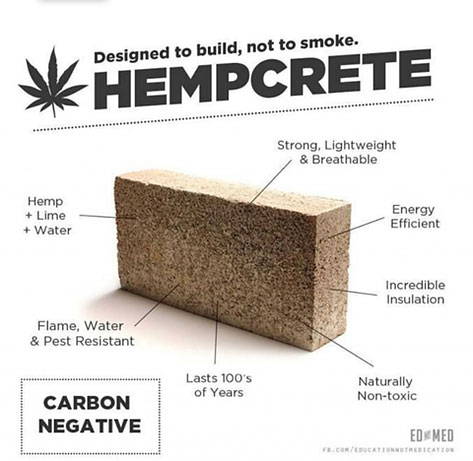 Hemp also has important applications in plant-based pest control, and it has been used for many years as a natural method of controlling the growth of weeds and invasive plants. Because they have such dense growth characteristics, hemp plants effectively “crowd out” weeds that are present in the soil, killing them off without the need for pesticides.

The Endless Benefits of Hemp

Hemp is chosen for industrial purposes on the basis of several key factors.

Both hemp and marijuana produce cannabidiol (CBD). However, hemp produces a much higher quantity of it - this refers to CBD dominant strains of cannabis. The cannabidiol infused oil produced from marijuana (cannabis oil) contains a high amount of THC. Therefore hemp-derived cannabidiol is more widely accepted and used. It is used to treat problems like acne, anxiety, depression, and more. It also has anti-cancer, anti-tumor properties and can also benefit heart health.

More recently, hemp has also been considered as a potential source of biofuel, and hemp plants can also be specially treated to produce ethanol or alcohol fuel. Currently, most biofuel is produced from other sources, such as cereal grains and dead plant matter. However, research into the viability of hemp as an alternative fuel source is ongoing. A Boon For the Human Body

Hemp is also a good source of protein, vitamins, minerals, and fiber for the body. It has omega 3 and omega 6 fatty acids. Therefore due to its nutritional value hemp can be consumed in the form of raw seeds, flour, hemp milk, or oil.

It’s mainly cultivated for recreational purposes and gives the user euphoric high. This variant can be used in various forms like blunts, pipes, vaporizers, edibles like cookies, brownies, etc. However, they can also be used to brew tea or can be sold as medicines for various ailments like chronic pain, arthritis, diabetes, depression, seizures, etc.

Female cannabis plants are usually preferred by the cultivators. The main ingredient in cannabis that decides the high is THC (tetrahydrocannabinol). Some strains can contain up to 30% THC, making them quite potent.

Principal Usages of Marijuana Include:

1.  It’s most often referred to as a recreational drug which provides relaxation to the body and mind by soothing the nerves.

2.  It serves a sacred and spiritual status in various religions and therefore is offered as an entheogen or a mind-altering substance.

Hemp Vs. Weed: How Hemp Differs from Cannabis

The classification between hemp and marijuana can be made on the basis of:

While it is true that most hemp plants are male and do not produce flowering cannabis buds, their lack of intoxicating effects is mainly the result of many years of selective breeding. The marijuana cultivators, typically eliminate the male plants to ensure the maximum production of sinsemilla flowers.

Marijuana appears a lot different from hemp plants. It has broader leaves, tight buds, and appears like a short thick bush (5ft) whereas hemp plants tend to be hardier and taller (up to 20ft) and have skinnier leaves, mostly concentrated on top. They mainly tend to grow upwards rather than growing side branches.

Marijuana is predominantly a recreational drug though studies have proved the several medical capabilities that it has. It is quite effective in chemotherapies, relieves patients from chronic pain, spasticity problems, etc. On the contrary, hemp is cultivated to produce industrial products including paper, paint, varnishes, cooking oil, plastic, skin products, hemp flour, etc.

Many of the differences in these respective forms of Cannabis sativa stem from decades of cannabis prohibition. While hemp plants are very versatile with a broad range of industrial uses, governments wanted to ensure they were incapable of producing intoxicating effects. This drove the production of cannabis plants almost exclusively underground for a long period of time, a situation that is only now beginning to change. Both cannabis and hemp plants have a lot to offer in their various forms. Cannabis and hemp are simply broad classifications of cannabis that has slowly been accepted in contemporary culture.

Both cannabis and hemp are part of the same family-Cannabis Sativa, therefore they tend to create a fair amount of confusion. They both are said to have originated in Central and South Asia (10,000 BC). These plants used to grow naturally for many years before we came to know of their varied properties through various studies. People initially were incapable of distinguishing between hemp and weed, but with passing time the differences became quite obvious to us due to their varied characteristics. Having said that, many countries have started accepting and addressing the numerous benefits these plants can bring about. And undoubtedly the popularity of Hemp and Marijuana seems to be reaching new heights.

What else would you like to know? Write us your questions below.

Share on
This entry was posted by Bjorn Dawson in Growing
Previous Reading Can Seeds From Female Clones Produce Male Cannabis Plants?
Next Reading Why Are My Cannabis Leaves Light Green?
Filter
Recent posts
x